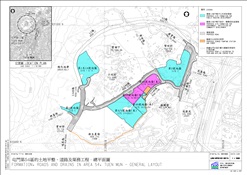 The project mainly comprises site formation of about 15 hectares of land and construction of associated infrastructure works to serve the planned public housing and government, institution or community (G/IC) developments in Area 54, Tuen Mun and is implemented under various contracts.

Site formation works and associated infrastructure works in Area 54, Tuen Mun commenced in phases since September 2011.  Construction works at Site 2 and sewerage pumping station under Contract Nos. CV/2011/01 and CV/2012/02 respectively were completed.  Construction works at Site 1&1A, Site 3/4(East) and Site 4A(West) under Contract No. CV/2015/03 are in progress. The remaining works at Site 5, Site 4A (South), Site 4A (East) and associated infrastructure works are under planning and their implementation would be determined to dovetail with housing and G/IC development in Area 54, Tuen Mun.