Tin Shui Wai New Town is located in the northwestern part of New Territories. Its development began in 1987. A total area of about 430 hectares of land has been formed by reclamation of the low-lying areas. The Development Zone of 220 hectares, located in the southern part of the new town, has been developed to house about 200 000 people, complete with all infrastructure and a full range of community facilities. A Light Rail network and new roads linking the new town to the trunk road network provide good communication with the Yuen Long and Tuen Mun and to the urban areas beyond.

Further expansion of the new town into the remaining areas to the north, known as the Reserve Zone with an area of 210 hectares commenced in July 1998. The infrastructure works were completed in stages from 2000 to 2004 to cope with population intake of the housing developments. West Rail and extension of the Light Rail service to the Reserve Zone were also commissioned in late 2003. To the northeastern portion of the new town, a constructed wetland has been completed which serves as a buffer between the developments in the Reserve Zone and the Mai Po Nature Reserve. The constructed wetland had been further developed into a wetland park and opened to public in May 2006. The total planned population of Tin Shui Wai new town is about 306 000 and the current population is about 290 000*. 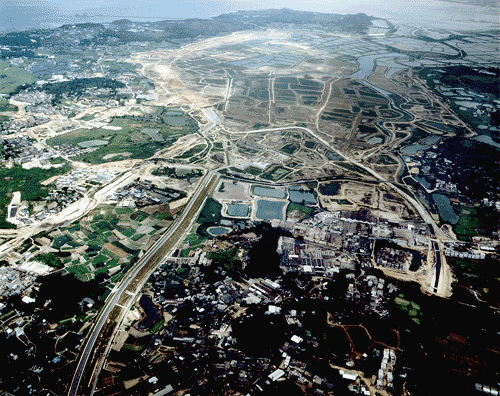